The "Elvis: The Complete Masters Collection" 36 CD set will be released through Franklin Mind. This set includes: 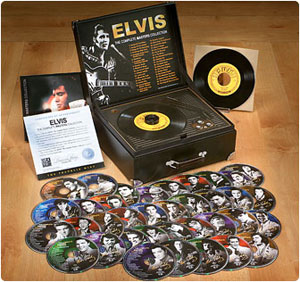 Rock 'n' Roll favorites come alive in Elvis: The Complete Masters Collection.
This brand new collection features the 711 Elvis recordings released during his lifetime. Each song has been digitally remastered for optimal quality and arranged into 36 unique volumes. You’ll get everything from Elvis’ first record "That’s All Right," to his first #1 hit, "Heartbreak Hotel," his biggest hit, "Don’t Be Cruel," and even the last Elvis recording before he went off to serve his country in the Army, "I Got Stung." It’s all here in the Complete Masters Collection. Receive your first three CDs, a free Collector’s Keepsake 45 RPM record and custom-designed display case for only $39.95 plus $10 shipping & handling! You will then automatically receive 3 CDs per month for just $16.65 per CD. Or you can save over $100 by ordering the entire collection today for $489.00, plus $10 shipping & handling. 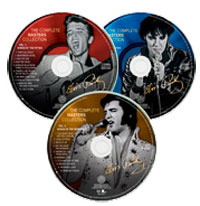 Plus, as a very special bonus, we will send you a Collector's Keepsake - a 45 RPM pressed-vinyl record, absolutely free. This is an authentic re-creation of Elvis' first single, "That's All Right," originally released by Sun Records. On the flip side is Elvis' recording of "Blue Moon of Kentucky." And you can show off your new collection in the custom-designed display case - a $50 value - yours free!

Tracklisting of all 36 volumes:

VOLUME 1: Songs Of The Fifties

VOLUME 2: Songs Of The Sixties

VOLUME 3: Songs Of The Seventies