This is the complete cover art of the December 2008 Follow That Dream release "I'll Remember You", a soundboard live recording of Elvis February 3 1973 Midnight Show as recorded in Las Vegas, and the FTD Classic Album re-issue of the "Elvis - In Person" album.

On the ShopElvis.eu site you can listen to previews of all the tracks from these two new releases. 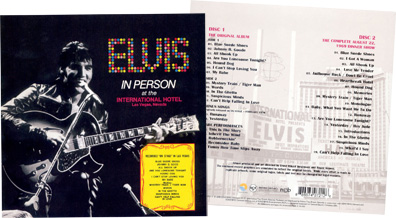 Login to give your opinion
Santa Claus wrote on December 12, 2008
What FTD thinks about the value of the fans/customers? Well, just look at the backcover of "I'll remember You" and you got the answer. They don't even try to hide it anymore.
JerryNodak wrote on December 12, 2008
I don't see anything wrong with the cover art. Personally, I look at the art once or twice and then it's just there. It's the music I'm most interested in.
Steve V wrote on December 13, 2008
I agree with Jerry for the most part. Cover art on CDs is a not as important to me as it was on a real LP which I still love to look at. How can u compare an open up deluxe LP cover to any CD style? CDs are too small and its hard reading the fine print. However I do agree that with the prices they charge maybe a little more effort can be made for those who really aprreciate this sort of thing on CDs.
I am Buffalo-Horn! wrote on December 14, 2008
At least you can read the track listing! Have a go at decyphering the information on the inner flap of "Nevada Nights"!!
Col />Edwards wrote on December 19, 2008
Wrong boys! They all should have been (also America, All shook up, Here I go again, etc FTD) on digi with lots of color pix from those fab photographers like Keith, Ed Bonja, Sean Shaver, Bob Heist and Hill (EPE Graceland should BUY UP ALL those prints from these guys and let us have & enjoy them on digipacks...not small CDs) Doesn't that make sense ? Also the texts should be readable for many of us with older eyes not being able to read the LovinY text on digi etc etc BandW pix for InPerson 69 ? Maybe but also some colored ones...can't do no harm. Looking forward to the 67&68 GuitarM and MonkeyBuzz outtakes on FTD and of course the BurnLove&hits outtakes from 72. When comes the rest from the movie outtakes in 2009 Mikael Ernst? Overdue are indeed KCreole, KCous, Roust, Speedway and last five movie soundtracts with outtakes WHEN