This is a 200-page book with images exclusively designed to complement the music from the film. It consists of two main sections; the recording sessions on January 16, 1958 and song scenes from the filming of the movie (including behind-the scenes shots). The images are classic and well-known shots with the majority being previous unpublished and taken by the original still photographers on the set (no freeze-frames)
The accompanying CD consist of the masters and the well-known alternative masters (no unreleased session reels have been found). As always, the music has been re-mastered. 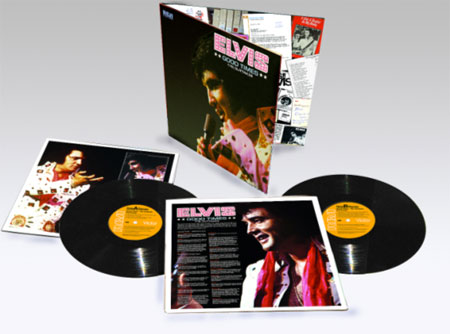 Following on from our previous strictly Limited Edition series, FTD is pleased to announce the release of a special 2-disc 180-gram vinyl set of GOOD TIMES – THE OUTTAKES. Supplied in a deluxe gatefold sleeve, it features the superb original draft artwork design that was superseded prior to release. UNIQUE!

On September 14, FTD will release the soundboard of the November 10, 1971 BOSTON GARDEN Show (previously released on bootleg) as this is the only available show from the early tours of the seventies. We believe that this is of such historical importance, that it should be available to everyone.This will be a 5” digipack with a photo booklet

On the same date, a 2-CD set of ELVIS (FOOL) in the CLASSIC ALBUM series.. This will feature a 7” digi-pack with an 8-page booklet.

Recently, we’ve had several frustrated e-mails from some customers about information getting out about our releases, prior to circulation of the official FTD announcement. Ideally, it shouldn’t be like that, but at the same time with so many people helping us in advance with our product origination, there is a good chance that word will spread before exact release plans can be chosen due to manufacturing and distribution issues. The nature of being involved in the ‘Elvis‘ industry dictates that the sharing of new information is a thrill to most people, so leaks will occur.

In an effort to improve the situation, we will try to announce our schedule further up front. The downside to this is that there will be times when unforeseen production problems cause releases to slip. So, in accordance with this, In September FTD plan to release another soundboard. Early November will consist of a classic album and 2-LP Limited Edition vinyl Set. Titles have not been chosen yet but we’ll update as soon as decision is made.