The two newest FTD releases are just out, but a new of set of three titles and some re-issues have been announced for late October. Besides the titles 'Rockin Across Texas'  (CD) and 'The Jungle Room Sessions' (vinyl), fans can expect the soundboard "New Haven '76".

Both the "Blue Hawaii" and "Standing Room Only" vinyl releases will be back in stock by October 1st.  for a limited period only. Both will be officially deleted once this stock is depleted.

The "Girl Happy" CD should now be in reprint and will soon be available with improved remastered audio with improved and updated graphics according to an update from EU.

Following on from his appearance in Fort Worth, Elvis rocked New Haven, Connecticut on July 30 at the Veterans’ Memorial Coliseum. Featuring photos from Steve Barile’s archives, New Haven ’76 is a 1-CD 5” digipack. A credible live version of Return To Sender is featured as a bonus track from Hampton Roads Coliseum on August 1, 1976.

The CD-only re-issue of "Rockin'Acccros Texas" got a new cover:

FTD Vinyl next release is a limited edition 2-Disc vinyl set of The Jungle Room Sessions. It contains all of the tracks featured on the CD edition and several added outtakes from other releases. Supplied in a new gatefold sleeve featuring additional Graceland images, it will be pressed on 180-gram vinyl and DMM Copper mastered at Abbey Road Studios, London. 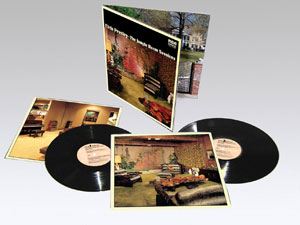