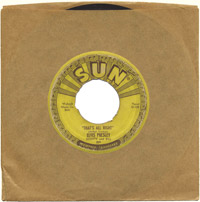 On this day in 1954, Elvis Presley recorded his first rock and roll song and his first hit, “That’s All Right, Mama.” Elvis had wanted to be a crooner, and in his first recording sessions he only sang slow ballads. But then, in between takes, Elvis and the other musicians started fooling around and singing a blues tune called “That’s All Right.” Sam Phillips asked them to start over from the beginning and recorded the song. He then rushed the record to the biggest DJ in Memphis, and it became Elvis’s breakout hit.