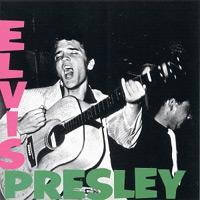 RCA released Elvis´ first album "Elvis Presley". The LP entered Billboard´s Best-Selling Pop Albums chart at #11. Within 6 weeks, it reached nummber one, remaining at the top for 10 weeks.The total stay stay on the chart was 49 weeks. It was the first album in history to sell one million copies. Certification as a million-seller was made by RIAA on November 1,1966.