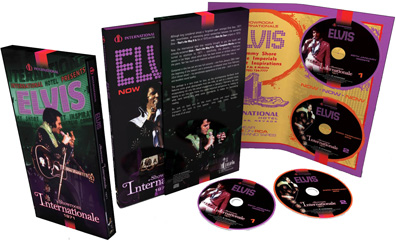 International recently released a book with 2CDs or should I say 2CDs in a book focusing on Elvis first engagement in Las Vegas during 1971.

Design
The design is beautiful! A 90+ pages hardcover book in a box, filled with both full color (the majority) and black and white pictures of The King on stage, backstage and on candid shots. Furthermore there are many memorabilia present to give it a finish touch. There are some pictures that are of such poor quality that I would personally have left them out, but for completeness’ sake…

The liner notes are called an essay by the produces, and rightfully so. It is well researched and a pleasant read while listening to the shows.

Both CDs are picture CDs, with a shot of E on stage.

Content
The content of the CDs that is. The first is filled with the January 28 show midnite show, previously released by Fort Baxter as Lean, Mean and Kickin’ Butt. What can I say? If the source isn’t too good it is hard to make a great sounding CD. The FB release was a bit thin sound wise, this one is very full. For that reason some songs sound better, but on some tracks – especially the songs with a lot of bass like Polk Salad Annie, You’ve Lost That Lovin’ Feelin’ and Suspicious Minds – it creates such a wall of sound that it gets irritating in my ears. A big pro of this first CD is that the producers the rarities of the engagement like Only Believe, Snowbird, There Goes My Everything and Make The World Go Away.

The second show (February 23, D.S.) sounds much better. It’s a bit thin in the beginning, but that’s something you get used too. Elvis’ voice is very upfront. It is understandable that By The Time I Get To Phoenix is mentioned, but it is very short… probably referring to a paternity suit. A frantic version of Mystery Train/ Tiger Man is one of the highlights in my ears and it is great to have Polk Salad slower again (and listenable because of the sound). Bridge Over Troubled Water get a nice treatment, but Elvis wasn’t as tight as in 1970 with the song. It can also be because he was having problems… he mentioned he had a flue and indeed his voice sounds a bit rough every now and then. It’s a pity that the show wasn’t complete and the producers spliced it with the January 28 D.S. (Suspicious Minds) and added The Impossible Dream from that same show to get a “complete” show.

Conclusion
The package alone is worth buying, disregarding what’s on the CDs. So it is very welcome that the second CD is more than enjoyable