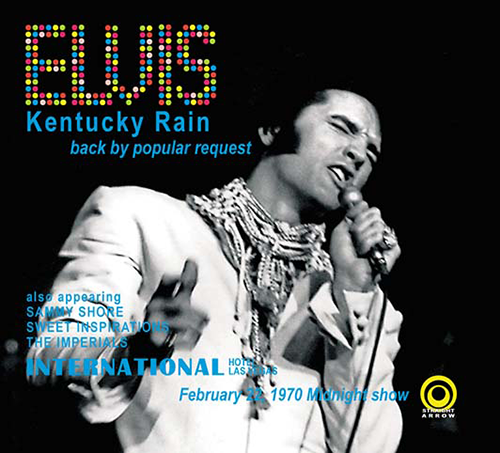 Sunday, February 22, 1970 Midnight Show, Las Vegas International Hotel, Las Vegas, NV
This year, the "STRAIGHT ARROW" label team promises to focus especially on the concert years 1969-1972. After the great success of our 1969 release, titled "ELVIS - STRIKE LIKE LIGHTNING!" (SA/SP 2019-56-02), we're back again – this time with two great releases from 1970! The first CD is titled "KENTUCKY RAIN" (SA/SP 2019-57-02). The February 22nd, 1970 Midnight show is a previously unreleased concert, taken directly from an original audience recorded master tape. This concert was never available in good sound quality thus far (note: in 2007, the "SR" label released a so-called February 22nd, 1970 Midnight show on the "Rock In Black" double CD, but this show was wrongly dated and in fact it was the February 23rd, 1970 Dinner show!)

The February 22nd, 1970 Midnight show recording is slightly incomplete, missing the last song "Can't Help Falling In Love", so we have included this song in the same good sound, as taken from the February 20th, 1970 Dinner show, to make the concert "complete" for listeners' comfort.

As usual, this release is presented in a de-luxe 6-panel digipak, with a collection of photos taken in Las Vegas, NV, February 1970 and a press review. 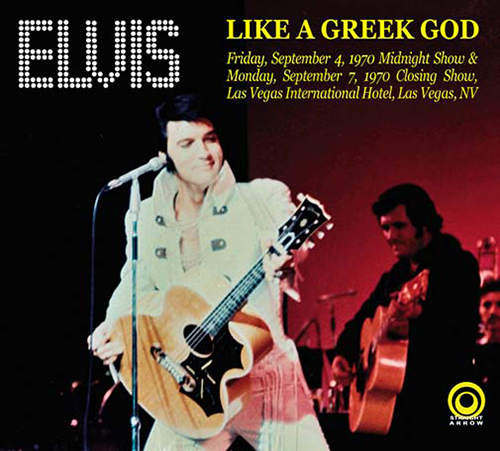 The September 7th, 1970 Closing night was released by the "SR" label in 2008 in very poor, muffled sound, taken from a degraded x-generation copy (the "September Nights" CD). Once again they have used an original master tape and restored it to crisp, clear perfection. Elvis' crazy Closing night performance never sounded better - until NOW!

Both concerts presented on this release were recorded by the same person. This release is presented in a de-luxe 8-panel digipak, with a collection of photos taken in Las Vegas, NV, August 1970 and a press review.

Both releases are expected very soon. In the meantime you may ask your local dealer for audio samples to judge for yourself! It's a new "STRAIGHT ARROW" so you know what to expect, anyway! Every second of these concerts was digitally restored, every click or disturbing clap in quiet songs manually removed, every drop-out or damaged place fixed to achieve optimal listening pleasure. What they plan to release the next time? Perhaps some unreleased concerts from 1971-1972, definitely not from 1976-1977 :-). Stay tuned!