A new book from Flaming Star/FTD: REBEL WITH A CAUSE follows Elvis between August 16 and September 30, 1956 from his arrival in Hollywood to his return to Memphis. Produced by David English and Pål Granlund, it includes many rare unpublished photos taken from the original negatives. The bonus CD features ELVIS PRESLEY: ROCK ‘N’ROLL NO.2 – an album originally released by HMV in the UK. It also features all 4 songs from Elvis’ first appearance on the Ed Sullivan Show on September 9, 1956 and a recording off the afternoon performance of September 26 in Tupelo Mississippi. 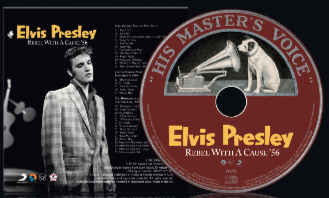