With the 40th Anniversary of Elvis’ passing comes a special release. Record players sold today are increasingly adding the 78rpm speed to the norm and these 5 magnificent Sun 10” (inch) replica singles play at 78rpm. This is the first time since Elvis Sun replicas produced in the 1970’s, that have been made to play the original 78rpm speed. Since then some were only made at 45rpm.
Each of the 5 Sun replicas have the original etched numbers included with the appropriate song sides and are by far the most original Sun replicas made. All the labels are perfect (as the original) in size, accuracy and color. All the singles come in the same type sleeves as sold with the original releases. The sound quality is excellent with the original Sun sound recordings (including That’s All Right) and is pressed on heavy stock vinyl.
This is a strictly low limited number release and an extra low limited number release of a CRYSTAL-CLEAR version in a clear polybag. A first time ever in this version for any Elvis Sun single replica produced.

We guess they are in better shape than this original one on eBay: 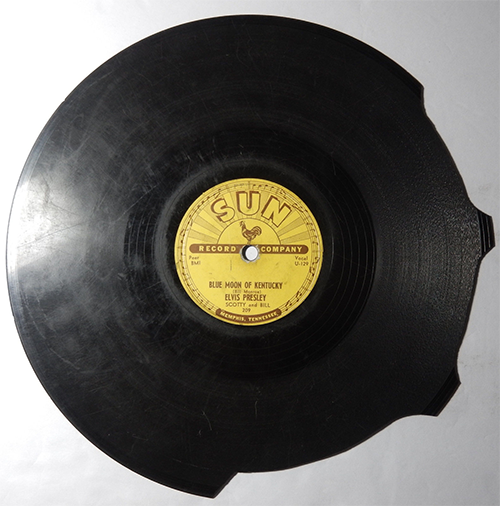 Source:Email
Login to give your opinion