As usual the design is top notch with this GRM outing. The booklet is well designed, unfortunately with pictures of August 1971 since GRM ran out of pictures from this engagement on the previous releases. The liner notes are interesting, and I share the point of view, but it gave me the feeling that the author was showing off, “look at me, using all this ‘literature’”… on the other hand that shows exactly he isn’t talking nonsense. As on earlier GRM work, the producers explain their decisions on the product too, always good to know!

As said, the CD contains the closing show of the 4th Vegas season. I reviewed it earlier when it appeared on Showroom Internationale 1971, in about the same sound quality. Maybe this version gives a bit more band, but the difference is not huge. Here is what I wrote earlier (keep in mind that it was compared to the other CD in that set, the Jan. 28 M.S.):

The second show sounds much better. It’s a bit thin in the beginning, but that’s something you get used too. Elvis’ voice is very upfront. It is understandable that By The Time I Get To Phoenix is mentioned, but it is very short… probably referring to a paternity suit. A frantic version of Mystery Train/ Tiger Man is one of the highlights in my ears and it is great to have Polk Salad slower again (and listenable because of the sound). Bridge Over Troubled Water get a nice treatment, but Elvis wasn’t as tight as in 1970 with the song. It can also be because he was having problems… he mentioned he had a flue and indeed his voice sounds a bit rough every now and then. It’s a pity that the show wasn’t complete and the producers spliced it with the January 28 D.S. (Suspicious Minds) and added The Impossible Dream from that same show to get a “complete” show.

GRM did the same edit to make the show more or less “complete”. As an extra they tried to improve the audience recording of this show, to give us the most special song of the show, Help Me Make It Through The Night, too. To me that was a waste of time since it is totally unlistenable. Even 30 years ago – when I was not spoiled yet - I would have skipped it (or fast forwarded it).

I did not need it for the show, like many others, but if you don’t have it yet.. it is worth getting, not the best sounding soundboard, but still an enjoyable show… and it looks great together with the other GRM releases. 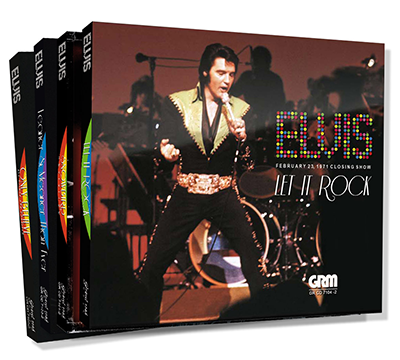 Login to give your opinion
Ciscoking wrote on June 09, 2014
The conclusion by Lex says it all...I agree 100 %.
You Dont Know Me wrote on June 10, 2014
Ha i knew it would be a waste of time buying this as i bought the original release of this show,,.. love the comment about the 'bonus' audience recording too -good review!~
mature_elvis_fan75 wrote on June 12, 2014
In ever had the other release this show was on but it seems this release isnt in good sound? Maybe i can trade for it somehow,dont think i want to buy it now.
Lex wrote on June 14, 2014
Mature, sound is fair to good, only the bonus is terrible sound.
VivaLasDavies wrote on July 21, 2014
Has anyone received their copy of this yet - I'm still waiting.