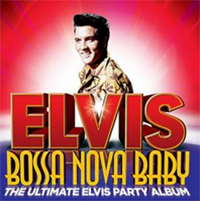 Login to give your opinion
ttwiise wrote on May 15, 2014
Dear me. dear me...
Andy_2 wrote on May 15, 2014
Sony, you have no interest in Elvis. Please stop.......
JerryNodak wrote on May 15, 2014
I'd buy it if it didn't have those damn Viva mixes on it. Yuck!
Smile:-) wrote on May 16, 2014
Great song, but when did Down in The Alley become a party song...? Or Guitar Man for that matter? Nice compilation in its own right, but after 1.000 compilations Elvis' credibility as a recording artist has been challenged for decades. Both in by the general public and the critics. The record companies of most legendary artists focus on the main body of classic albums released by the artist.
Smile:-) wrote on May 16, 2014
...eh... too fast...:-/ :-) ..."This have affected the opinion of both the general public and the critics..." PS! There should be an option to edit our posts on this site. Also the possibility to click "like" on other posts
Raleighroadace wrote on May 19, 2014
They should put Do The Clam and My Little Friend on this album.
jean michel wrote on May 20, 2014
am I wrong or the city behind Elvis is Hong Kong ?!
Jerome wrote on May 21, 2014
The Bosa Nova cover is quite a piece of art...
GEORGE (GK) wrote on May 22, 2014
Its possible that RCA is going to "delete" the "Viva Elvis" album-CD from the catalog and putting the song "highlights" on this "Party Album CD". Some good choices-Some bad choices. Can't RCA-Sony-ever get it right? The only thing being done nicely for the Elvis catalog are the "Legacy" commerical releases and the "FTD Label". The Budget CDs are ruining the catalog. Yes, Budget CDs can work, if some thought is put into it. Bossa Nova Baby [Viva Mix]- A Little Less Conversation [JXL Remix]-Rubberneckin-[Paul Oakenfold Remix Radio Edit] Okay those Remixes are good choices for a "Party Album" but it loses the vibe of a "party-dance album" when tracks like "Adam and Evil" & "Guitar Man" (unless its the 80s remix) and "Girl Happy" and Down in the Alley" are added.
Lou A wrote on May 22, 2014
With the new commercial ( shown elsewhere on this site) using Elvis version of this song this compilation should sell.
Tom McAllister wrote on June 20, 2014
Is there anything new on this CD that we do not already have?