Hawaii: For God And Country Deluxe

3764 BLVD Publishing announced two other versions of their Hawaii '61 release. A 112 page book/CD and a special pacakage.

Since Elvis fans received the news of the Hawaii 1961 benefit show so enthusiastically we have decided to release our Deluxe Edition of “HAWAII – For God and Country” instead of the previously announced digipak.

The Deluxe Edition is a 112-page, hardcover book + CD package, with the show and radio broadcast on one disc.

This is a special edition for the serious collector.

The Deluxe Edition of Hawaii For God and Country hardcover book (112+pages)
With the audio CD (featuring the benefit show & Radio broadcast.)

A beautiful reproduction of the original ticket (For this edition only)

The limited reproduction of A large exquisite autographed promo photo only
given to the first 1000 ticket buyers in 1961. (For this edition only) 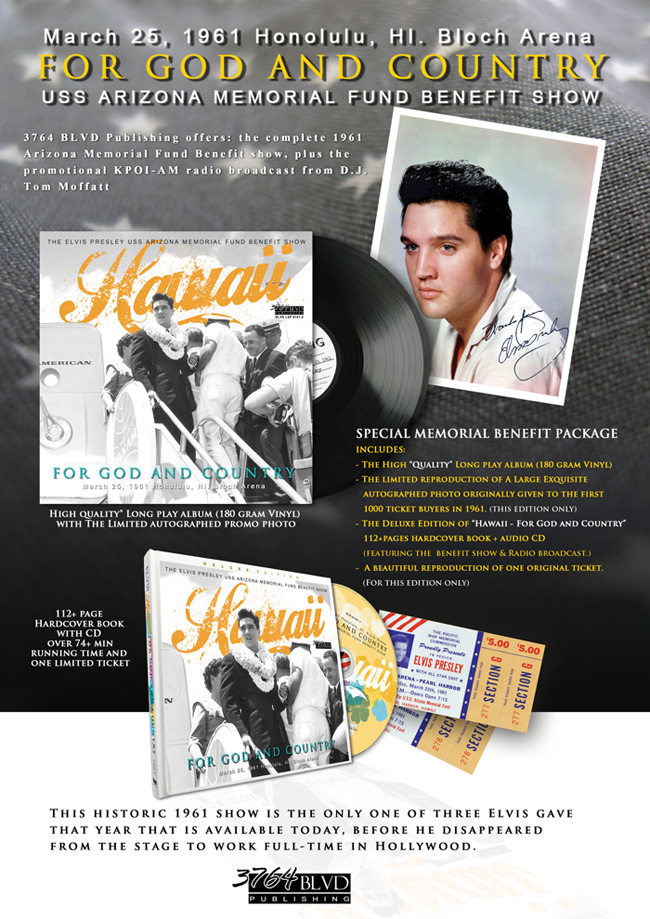 Source:Email
Login to give your opinion
Herman wrote on January 26, 2012
C'mon, where is the 5.1 dvd-audio disc ? The first MRS releaeses had all great dvd-audio discs inside. Another big mistake.....
Tony C wrote on January 26, 2012
It appears that the two companies are trying to out-deluxe each other. While I would normally stick with the tried and trusted MRS release, this one does look very tempting. If I go for this, it will be as well as the MRS release not instead of. Regarding the 5.1 DVDs in the first two MRS packages, I never really rated them. I played them once but never returned to them, preferring audio releases to be on CD. 5.1 sound can only be created properly from a multitrack source, 5.1 creation from mono is very clever, but I prefer mono.
benny scott wrote on January 26, 2012
Hi Tony, tempting indeed for me too. Question is : what about the sound ? Which label will have the best ? Of course, if the source will be the same there will probably be no difference, but how can one find out in advance ! Buy both releases ? Really don't know what to do yet .Always El.
wayup wrote on January 27, 2012
Looks very well...a lot of effort injected into this release, no doubt.... hope the audio will be great!!!
John Burrows wrote on January 27, 2012
fake memrobila who needs it. This release is a last desperate attempt to undermine the official release by MRS. I cant see this release working. I also dont believe for 1 second that the person knowing who he is behind this release will ever get the money to do it. I can do without all the rubbish. I know the MRS release is a winner.
Natha wrote on January 27, 2012
Benny Scott, the problem here is how to compare? Who will buy both? And by the time the conclusion might be that this version is the best it is no more available. While the MRS version might be slightly easier to buy. Like John Burrows I am interested in the actual concert and much less in the rest.
Lex wrote on January 27, 2012
JB, fight your wars elsewhere, not here!
benny scott wrote on January 27, 2012
Natha, absolutely agreed ! That's what I had in mind too: waiting too long to make a desicion could result in missing both of 'em. So I think I'll stick to the MRS version, they never let me down in the past. Have a nice weekend. Always El.
drjohncarpenter0117 wrote on January 27, 2012
I suppose this will depend on fans budget's as to what version to go for?.......MRS or this 'new' label.To be honest MRS has the edge if you look back at previous release's and we do know what to expect package-wise, so for me i will stick with MRS.....just my opinion and wish the new label all the best??..........
Steve V wrote on January 27, 2012
Its MRS for me, love their packaging and the cover they have on this one is great. Also, cant stand the title of the other release. It makes no sense to me at all. Soundwise, I'm sure it its all from the same tape source so what could possibly be the difference? If there is any, only a dog will be able to tell.
1billionKing wrote on January 28, 2012
Just so confusing. Hope they don't lie when saying that the sound is great...
Tony C wrote on January 28, 2012
The sound samples on Amazon for the MRS release sound great, all of their previous releases have lived up to expectations.
burton wrote on February 03, 2012
It's only going to be the MRS version for me.