We found this commercial on FECC:

Christmas is coming early in 2010. Soon available from Venus Productions a new double CD set titled Christmas Today. The red CD features Nashville recordings from May 1971 with various out-takes and undubbed masters taken from great quality acetates. This inspiring music will move you and bring you back into the Holiday Season mood. The blue CD may sound unessential to most of you, but we predict it will become one your favorite CDs straight away. The recording sessions for the album Elvis Today took place at RCA’s studio on Sunset Boulevard, and Elvis was really up for it and his lively enthusiasm can be heard throughout the sessions.

Besides the great sound quality of both CDs, the blue one contains some unheard highlights. By example the master take of ‘’ Fairytale ‘’ runs about 40 seconds longer, the one from ‘’ Susan When She Tried ‘’ runs a bit longer with his original ending, plus there are several bits and pieces that will make you value this CD more than you think. This Holiday delight will be released in a standard jewel case with a 16 page booklet. The booklet will feature two front/back covers you may use according to your taste or season. Get a copy and bring it back home as it’s Christmas Today. 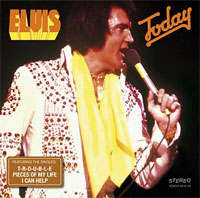 Source:For CD Collectors Only
Login to give your opinion
JimmyCool wrote on April 28, 2010
I have to admit that this cover of TODAY actually looks much better than the original...
bray1977 wrote on April 28, 2010
Agreed Jimmycool, its a much better picture and far sharper than the original. The CD content looks quite good too.
Rob V wrote on April 28, 2010
CD Blue (Today) must be from the FTD release. Longer versions...? Or could they be fake???
drjohncarpenter0117 wrote on April 28, 2010
Just wondering why 'Venus' have gone with jewel case format on these 2 releases and not the really excellent book format from there previous 2 releases.Really love the 'unessential' comment and this will open the floodgates for the usual negative comments about import releases. Oh well let's dig the xmas tree out and create some atmosphere when this drops through the post box.
Myron (Pa) Stavros wrote on April 28, 2010
I just don't see the reasoning behind the release of such a double CD; unless the outtakes are so different from the ones we already have.
FLY-TROUBLE! wrote on April 28, 2010
Bearing in mind that we already have the Today FTD and the Wonderful W.of Ch. FTD will be out sometime in the near future,there's no need to buy it. The 40 seconds longer "Fairytale" and the few unreleased seconds here and there are surely nice,but are those really worth $35? For me those aren't.
japio wrote on April 28, 2010
What a idea to come with a christmas cd. ofcourse Today will not bring too much new "things" And most of that we have i guess. For the christmas album i have my doubts. Because it coming from good sounding acetates. But that are test pressings. and i never see an acetate with many takes (session ) only one track maby a short f.s ,or counting. I think also that we have most of the tracks. But it is still a welcome addtion ,and the first time a cd with almost only outtakes, undubbeds. It's time to get a christmas cd from RCA/Sony. I know the tapes exist. A few years ago , the reserve tapes from this session and the session from jailhouse rock was on sale by an auction. There are also pictures of the tapes.and the tapeboxes. But back to the cd's . The covers are very good. I like this kind of releases.Someting new,something old,good sound and a good artwork. ( and yes this time i'm very positive)
Ciscoking wrote on April 28, 2010
If we get a studio disc with new outtakes - especially from the 70`s - I´ll be more than happy. But I am sure sooner or later we will have it on FTD..anyway..until then it seems like a winner...
Zoltan84 wrote on April 28, 2010
Yeah... Until Then :) Let's say FTD releases the Christmas 1971 stuff in this december. Then what will you do with this 2cd-set? You won't even be able to sell it. The FTD release of the 1971 Christmas album will make this bootleg redundant.
Ciscoking wrote on April 29, 2010
Kind of reminds me of an import CD called There`s A Whole Lotta Shakin Goin On which was great when it came out..a few week later we had Essential Elvis Vol. 4 and it was superfluous..with only bits of bad language being the "new" stuff left..
GEORGE (GK) wrote on April 29, 2010
I wish RCA/Sony, would "officially" re-release this album, with this photo, and make it special by remastering and remixing the CD, and adding the out takes and Longer mixes, and such, from the recording sessions. I have the "Today album", on a FTD release and it's great, and, one of the better albums, and it deserves to be in the music stores, for the general public to buy and enjoy, at a nice price.
japio wrote on April 29, 2010
Zoltan. Mabey youre right. I said the sessions of the 57 christmas album was on sale on a auction But tell me what's the difference between all the live shows on FTD ,or sessions . It will sell ofcourse. In all those years the fans really want to hear alternates. because we don't have almost nothing. Ok i know that was almost no attention for the christmas duets cd. But that wasnt new. I have a few album of jim reeves from the 70's with duets with Deborah allen ,or a new version of but you love me daddy. And why should a bootleg sells more than a FTD- release. Ok it can be played only in november / december. But a great new christmas cd will be fine.Especially when you'll know that the (reserve ) tapes exist. Till then a good idea. For both cd's. And just what George says . Mabye a good title for the legacy serie
Elvis_The_King wrote on April 30, 2010
QUOTE: "Kind of reminds me of an import CD called There`s A Whole Lotta Shakin Goin On which was great when it came out..a few week later we had Essential Elvis Vol. 4 and it was superfluous..with only bits of bad language being the "new" stuff left.." Essential 4 was released approx 11 months after the bootleg and it dit includes some songs nott on bootleg.....I have never been more excited regarding a bootleg release as I was when i got There`s A Whole Lotta Shakin Goin On in early september 95. This was the first time we got 70 studio outtakes in great sound....not 1 but around 20 of them :) Regarding this new release......I have pre-ordered mine as I simply cant get enough of this kind of releases......some prefer soundboards but not me.