Here is the first official indepth look into the long awaited and anticipated Viva Elvis which will run for 10 years at the Aria at City Center.

The opening of Cirque du Soleil's Viva ELVIS is predictable, nostalgic and – if you're familiar with Elvis Presley's fabled Vegas years – utterly emotional.

A chorus line of dancers, their backs to the empty seats of Aria Resort's Elvis Theater, face a three-story black curtain spotted with Sun Records 45s. Booming over hundreds of hidden speakers is Richard Strauss' Thus Spake Zarathustra, famous for its anthemic roles in both 2001: A Space Odyssey and Presley's '70s stage shows. 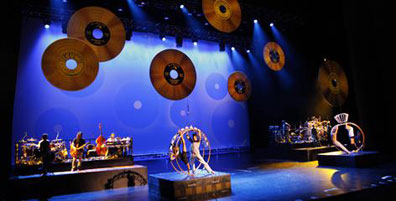 As the music swells, the curtain falls and 30-plus cast members start dancing frenetically as vintage Elvis clips play on a huge screen overhead. Thus kicks off yet another rehearsal of a spectacle – opening Dec. 18 and scheduled for a 10-year run – that downplays Cirque's circus roots in favor of lavish dance-fueled production numbers.

Not that those trademark acrobatic feats are gone.

"I'd never played with acrobatics in my work before, but I made sure they were a part of this show, because (Cirque) fans expect that," says Viva ELVIS director Vincent Paterson, whose choreography résumé includes dancing opposite Michael Jackson in the Beat It video.

"It was fun to see how we could incorporate that (circus) element into a show about Elvis," he says. One way: A trampoline routine references Presley's love of high-flying comic-book superheroes.

Viva ELVIS breaks the performer's life down into a few key phases, with sets to match. Among them are a fairgrounds scene invoking Elvis' playful side, a 21st-century Jailhouse Rockset in which some performers dance upside down, and a Vegas-era extravagance that includes giant Elvis statues doubling as columns. 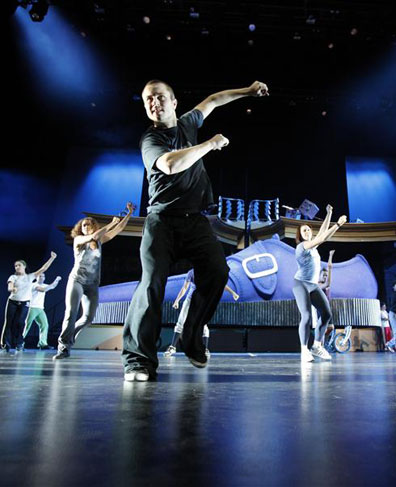 Wild sets by rock tour veteran Mark Fisher aside, the music is the star here. Which means Elvis. The late singer's vocals are layered over a live band, which takes some liberties with the catalog though in a playful JXLLittle Less Conversation remix way.

But there is one unenviable challenge Viva ELVIS does face: creating a live show compelling enough to pull theater-goers' eyes away from the gyrating, joking and always-youthful icon on those oversized screens.

"We are up to that challenge," says executive producer Stephane Mongeau. "Elvis has incredible charisma, still. But we hope what we have here will only add to his legend. After all, Las Vegas is his temple."

Source:USA Today
Login to give your opinion
Brian Quinn wrote on December 07, 2009
'Viva Elvis' will be a winner. Can't wait to see it.
samcra wrote on December 07, 2009
One word. FANTASTIC !
Harvey Alexander wrote on December 07, 2009
As the man says in the video: "Elvis is timeless". In that case, don't mess with his music. And what has all the gay dancing got to do with it? Another embarrassing flop further dragging Elvis' reputation into the gutter. I wish they'd leave him alone. He's far bigger than all of this tosh.
Sirbalkan wrote on December 07, 2009
Harvey Alexander... Elvis is timeless yes but your other comment here is so rude.What's wrong with gay dancers?Elvis is Elvis to everyone involved with this huge project.As long as people are good at what they are doing, it's their privacy and you have to respect that ok? Oh My Good God! As an interior designer (28) I loved everything here, the concept, movements, satge design just wow...!!!I can't wait to travel directly from Turkey to Las Vegas just to see our ELV1S !!! Well done everybody...
Ruthie wrote on December 08, 2009
I have my tickets & can't wait to go. This is going to be so incredible. I am even more excited because a friend of mine is in the cast. Any Cirque production is outstanding & if Elvis could be here he'd be quite proud. Finally, a top class production. Move out of your time warp, Harvey. There is nothing gay about this production as if that matters. Elvis danced only not this good!