A Day In Dayton Reloaded

Two import producers that used to work together split and both delivered the same material on a 2 CD set. Which one to pick … ?

The producers from the Gravel Road Music label that released "A Day In Dayton" shoved the two discs in an attractive 2 CD 3 panel digipack . The design looks o.k. but other than the tracklisting for both concerts the set does not contain any information. Contrary to that the producers from the new Boxcar label - working with the DEA label - managed to fill a 100 pages book with images and liner notes on the tour surrounding these two concerts. The designer decided to follow the design of the "TTWII" book. This may fit well on a shelf, but picture wise I would have preferred a different format, more suitable foe showing these pictures. Both designs feature the Dragon theme from Elvis' suit. 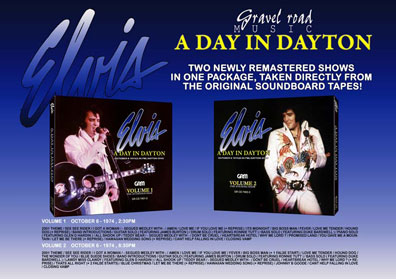 But the conclusion must be that he lathers wins hands down; as it was a great read. They might as well have added a few more discs as these producers did on their "That's The Way It Is" set and cover the entire tour in the book and on the discs. That would have made a great set for completists (not for music lovers as Elvis gave some poor performances during this tour e.g. the infamous "College Park" show). 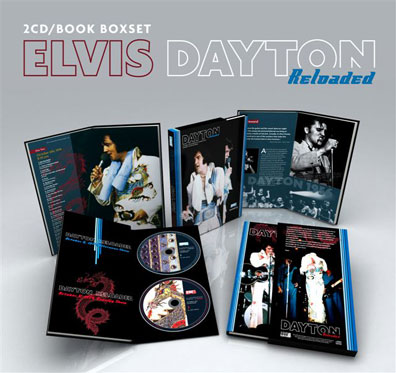 The four discs before me contain the two concerts Elvis Presley gave on October 6, 1974 in Dayton, Ohio. The differences in the audio of these sets - both claim to have used the "master tapes" - is not that big; both sound very good. According to some of the experts on the FECC forum the main difference is the minimal use of reverb or loudness on the Boxcar version. Both versions are a step-up from the original releases of these two shows.

Personally I could not hear that much difference between the afternoon show releases other than that I thought the GRM version had Elvis and the band a little more up-front. Funny enough the "A Day In Dayton" disc is recognized in iTunes as "A Profile Vol. 2 disc 3" ... a hint of material used?

The discs with the evening show both sound better - more fresh - that the afternoon show discs. Here too I prefer the sound of the Gravel Road release as everyone on the stage are a bit more up-front.

As for the shows; these were released before; the afternoon show on the before-mentioned Fort Baxter box-set, the evening show on Madison's "Breathing out Fire" CD.

The first show may be overlooked by many fans as the Fort Baxter set contained the infamous College Park show during which Elvis looses control and goes "Strung Out". The review by Johnny Savage on the FECC site is rather short:

"A week later Elvis played Dayton, Ohio, and the set includes the October 6th matinee show. He's more focused, and a lot less chatty. By comparison, it's a much better show. The great "Promised Land" makes the set, although it doesn't rock like the single. He remembers the words to "Heartbreak Hotel" and keeps it together on "Fever". Listening to this is a relief after College Park, MD."

Our review on the evening show as released on "Breathing out Fire" read:

On October 6, 1974 Elvis played Dayton twice. The matinee-show (released on "A Profile, Volume 2") showed us already that Elvis was in much better shape than the week before, when he was hardly able to stand on his two legs. Listening to this show you'll find out Elvis was really having a good time himself. The ending of 'Fever' really shows that, and also all jokes he made during the show sound 'real'. Elvis delivers a great version of 'Big Boss Man', is teasing JD Sumner (as usual) during 'Why Me Lord?'. By the way, the background singers sound marvelous on 'Why Me'.

Probably James Burton wasn't able to hold his guitar after 'Johnny B.', because it must really have been hot. It's a pity Elvis dropped 'Promised Land' and 'It's Midnight' from the matinee-show, but we got 'The Wonder of You' and a great refreshing version of 'That's All Right' instead.

For a different take on this show, this is an excerpt from the original review by - again - Johnny Savage - from the FECC site:

Taken from a superb soundboard tape, one may for the first time enjoy the complete evening performance from 06 October 1974. Unlike just a week prior, Elvis flies high on the collective spirit of 13.500 fans attending the gig. Like the matinee set, available from a mixing board tape on Fort Baxter¹s 4x CD set "A Profile - The King On Stage Vol. 2", Presley is more focused, a lot less chatty. They¹re both superior to the Maryland debacle. Although low in the mix, it's obvious from the moment Presley hits the boards that Dayton is wild for the man from Tennessee. Elvis dances through his usual set openers like "C.C. Rider", playing the crowd's affection, hard.

The University of Dayton is awarded three more songs than earlier in the day, including Presley taking a spin on acoustic guitar for "That's All Right, Mama" and "Blue Christmas"! "I have a lot of people that ask me if I play the guitar and the answer is no ... I mean, uh, yes I can!" Elvis claims. And he backs up those words. His very first single from 1954 is given a nice ride, Presley even asking the band to slow it down a bit. What a treat!

Most of his other 50's tunes are run through with the same unfortunate casualness that makes one wonder why he sings them at all. Presley chooses to dig down, in his own magical way, on the uptempo blues of "Big Boss Man" and both of Olivia Newton-John's current hit singles, "If You Love Me (Let Me Know)" and "Let Me Be There". Imagine how enjoyable creatively arranged, well-recorded studio versions of these singles might have been, given Presley's obvious affection for them! Deep bass gospel singer J.D. Sumner's spotlight number "Why Me Lord" (with help in the choruses and jokes throughout by Elvis) and "Hawaiian Wedding Song" are extended with Presley-led reprises. "The whole ending was wrong, it wasn't romantic enough, we have to re-shoot it", jokes Elvis to backing vocalist Kathy Westmoreland at the conclusion of the Hawaiian classic Presley originally recorded in 1961. Not surprisingly, laughter replaces romance during a second stab at their harmony ending.

The night concludes with a decent run through Chuck Berry's peerless 1957 single "Johnny B. Goode", lead guitarist James Burton "ringing a bell" on his red Fender Stratocaster guitar as usual, and the Elvis concert-closing staple, "Can't Help Falling In Love". This isn't Elvis Presley at his most intense, but the mutual warmth between singer and audience makes for a perfect time capsule of something now a quarter of a century gone: the 1974 Elvis Presley Show.

Listening to these shows twice this weekend I must say I pretty much enjoyed hearing these again. There is nothing really special on these discs, but it is enjoyable entertainment writing a review. Nevertheless I do hope these labels will have another catfish on really interesting material trying to deliver the

Login to give your opinion
ttwiise wrote on December 12, 2009
A good honest review (just what we need). I have the boxcar set and confirm that the packaging is outstanding once again, aside from some mis-spelling and some pictures spanning the fold (a pet hate) it oozes quality. The sound on the discs is great (better than most ftd's) though I can't compare with the gravel road release as I don't have it. All in all money well spent and roll on the next release.
Orion wrote on December 12, 2009
This set is of special interest to me. I received my Master's Degree from the University of Dayton; so, I had to get this one. I must say it's a great package from start to finish. I found both shows very enjoyable, although the insrumentation on the afternon show is somewhat lower in the mix than all the vocalists. It's always nice to hear what James brings to the party, but he's lost in the mix on the afternoon show. The evening show has a much better mix. As far as performance, Elvis is much more focused and entertaining than the week before in College Park. I know the set is "sold-out", but it's worth tracking down if you can find a copy. The book itself is superb with it's excellent narrative and great pictures from the actual show and from others on that tour (notice the bandage on his hand). As far as what Boxcar might bring us next, I feel from reading the text there might be a hint when it mentions Elvis' next move - Las Vegas in March of 1975. That was another interesting time in Elvis' life. That was when Barbara Striesand came to Vegas to offer Elvis the role in "A Star is Born." Elvis had also just finished recording the excellent "Today" album. Just listen to FTD's "Big Boss Man" CD, and you'll know that Elvis was focused and putting on some great shows that March. Let's hope that BoxCar has a couple of great shows from this stint in Vegas and well as a knowlegable writer getting the story together from what was happening to Elvis at the time.... I could enjoy having a document from that period in Elvis' life.
You Dont Know Me wrote on December 15, 2009
What an excellent 'review!' its CLEAR after reading this which disc's sound the best, but also what packaging/book is best also. great review!