Eddie Bellman, the Biloxian who helped keep the “Elvis was here” stories alive on the Mississippi Coast, died Friday at 89. Through stories backed by photographs and film, Bellman regaled locals and occasionally the nation with observations about a young Elvis, who in 1955 and 1956 performed and played here.

Bellman took Elvis Presley on his first deep-sea fishing trips, where The King snagged bonito, mackerel and sharks. On one trip, Bellman took an 8-mm movie camera, and his 17 minutes of color clips are now classics of the early Elvis years. Bellman’s rare film footage shows a 21-year-old Elvis who was already making movies and gold records but not yet insulated from the public.

“Elvis was a happy person then, very accommodating, very friendly, cooperative and very polite,” Bellman told the Sun Herald. “He was so happy to be out on that boat...His way of paying me back was to make an appearance at my shoe place.”

With his usual humor, Bellman added, “I don’t think anybody bought shoes that day and they really messed up the store.”
Bellman’s footage shows Elvis pretending that a boat boom is a microphone.
Fans particularly love the scenes of Mrs. Presley feeding Elvis his favorite peanut butter and banana sandwich.
There is also film of Elvis frolicking with Biloxi girlfriend June Juanico. Bellman stuck the film in a closet and forgot about it until 1997 when Juanico wrote a book about her Elvis relationship.
Some of Bellman’s footage has appeared on TV shows such as “Entertainment Tonight” and “Inside Edition,” and in a video called “Elvis’ Lost Love.” 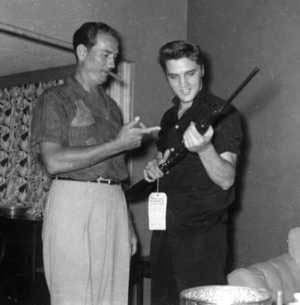 Presley repaid Bellman by signing autographs in his shoe shop inside of David’s on Howard Avenue. David Rosenblum, who owned the main store, wanted to repay the star, so he and Bellman presented Elvis with his first .410-gauge Winchester pump-action shotgun. That presentation has become a classic local Elvis image.
Bellman’s graveside services are 2 p.m. Monday at Southern Memorial Park in Biloxi.
Source:Sun Herald
Login to give your opinion
bray1977 wrote on November 08, 2009
Very sad. My condolences to his family and friends.
Dixieland Rocks wrote on November 09, 2009
R.I.P.
HangLoose wrote on November 10, 2009
R.I.P. Eddie.
baby blue wrote on November 14, 2009
Sad to hear......RIP Eddie