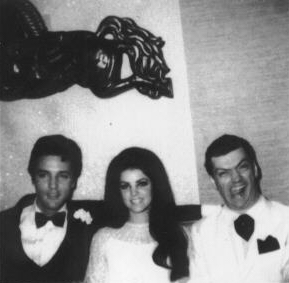 Leslie Hindman Auctioneers announces a once in a lifetime opportunity for Elvis Presley collectors and fans. Over the years many collectors have asked, “Whatever happened to the Gary Pepper collection of Elvis Presley memorabilia?” Early in his career, Presley befriended Gary Pepper, a young man with cerebral palsy, who ultimately became a close friend and the president of one of the King's first fan clubs, allowing him to amass a significant collection of personal effects gifted to him from Presley himself.

When Pepper moved to California, he left the majority of his collection to his friend and nurse, who was originally hired by Elvis to look after Gary. Hopeful that collectors and fans can enjoy the memorabilia so treasured by Gary Pepper (shown opposite with Elvis and Priscilla at their wedding), she has recently decided to sell the collection at auction.

Untouched for over three decades, this special collection will be offered for sale at Leslie Hindman Auctioneers, Sunday, October 18th, 2009 with a public exhibition Thursday, October 15th through Saturday, October 17th. A portion of the proceeds from the auction will be donated to United Cerebral Palsy of the Mid-South.

Highlights from the auction include clothing worn by Elvis Presley, a large lock of Presley’s hair, a telegram sent to Gary while Elvis was in the Army, Christmas cards to Gary from Priscilla and Elvis, a significant collection of Elvis LPs and 45s, two near mint Sun records, as well as numerous 45s from Presley's own juke box, autographed record sleeves, an incredible selection of souvenirs, movie stills and Graceland ephemera, and other memorabilia from celebrities such as signed photographs of the Jackson Five and Marilyn Monroe.

Additionally, the auction will include hundreds of candid photographs of Elvis, including photos documenting some of the most intimate moments in Presley’s life and career such as his return home from the Army, his wedding to Priscilla, Lisa Marie’s first days home from the hospital, and other photos taken at Graceland. Many of these images were taken by Gary Pepper with a Polaroid camera that Elvis gave him early in their friendship. A number of these original photographs were featured in The Tankcaster, the newsletter for Elvis’ fan club known as “The Tankers,” which are included in the auction as well as the Polaroid camera itself.

While Elvis’ life has been well documented, the intimate photographs and items in this sale give collectors and historians a new glimpse into Elvis’ life and character through his enduring friendship with Gary from the early days of his career until his death. Thirty two years after his death, this collection presents a remarkable post-script to Elvis’ life and legacy.

Source:Elvis Information Network
Login to give your opinion
tuscanresident wrote on August 18, 2009
Oh boy, I wish I could afford it. I was a Tanker member many, many years ago. Gary was the closest Fan Club President to Elivs (probably ever) and a thoroughly nice guy.
Steve V wrote on August 18, 2009
You have to be wealthy to compete for the real upscale collectibles like this. These are priceless. I guess thats why rubber ducks, budget cds & garbage cans are so popular. They are affordable.
Michael.W. wrote on August 20, 2009
I hope i win the italian jackpot....