Here’s a release I’ve really been looking forward to: Black Angels in Vegas. Everybody knows the funky Black Angels story by now, so let’s not go into that. The reason I couldn’t wait to get this particular 2CD set, was because of the “complete package deal”: two cd’s plus an 85 pages booklet. And was it worth the wait? O my golly, yes.

There used to be a time that I would save my Sunday’s payment for albums like “O Happy Day” where you weren’t even sure if it was Elvis you were listening to, or Donald Duck. Still, back in those days that was all we had. Today the bootlegging industry spoils us with topp quality releases along the lines of this set.

The booklet comes in seven chapters: introduction, 1974, the Summer Festival, the Concert, Karate (“Otagai ni Rei”), Tourdates and Tracklisting. The pictures in the book(let) range from “good” to “crisp clear” with just a few “fairs”, although we haven’t discovered any unseen pics – but then again, it’s been 35 years since August 1974 and most likely not too many unknown pictures of that era will surface. On the other hand, the producers behind Venus Productions obviously took great pride in their work, as all the pictures match the text in the booklet. 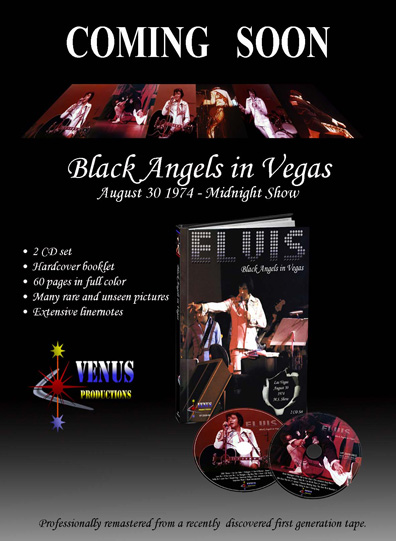 Did we find new information? Apart from the fact that 1974 marked the first time that Elvis and his band stayed in separate hotels, no: we knew about Elvis’ love for karate, his mood changes in the second part of 1974, the press reactions, the song choices, Colonel’s greedy deals and the long, often strange – but never embarrassing - dialogues. But again: what new is there to discover after almost four decades, right? But we enjoyed reading the comments, and we do agree with most of the side notes, like: While Elvis often gets criticized for this kind of monologues, no one is criticizing Bob Dylan for his sometimes chaotic concerts during the 80s or Bono Vox for his lengthy monologues from U2. Sometimes you get the feeling that because it’s Elvis, it seems to be normal to bash him for all the things happened after the Aloha Special. Some might complain about the talkative mood Elvis is in. They should remember that this was a live show, meant for people in the audience. It was not meant for someone listening at home.

But, on to the main thing: the show: the August 30 1974 show must be one of the loosest, most relaxed and most unpredictable shows Elvis did up to then. The interaction with the audience is obvious, as he seems to talk to the entire audience one time, and then to individual people the other. He jokes with his musicians – “JD’s the world’s lowest bass singer… he’s the original deep throat” – talks to Charlie, turns to the Band – “they’re the finest paid musicians in the world and they blew it” – introduces Dean Nichopolous and treats him to his favorite song “Suspicious Minds”, tells a hacker to “fuck you” and basically doesn’t care if the show is taped or not. He probably didn’t even know, let alone paid attention to it. The show has been released before, so I guess the content and tracklisting are well know.

The quality of both CD’s is top notch. A pleasure to listen to, on condition that you like Elvis in his “talkative mood”. Was this a great show? Yes – no doubt. Even on stage in Vegas for 2200 people, Elvis was more an entertainer then any modern singer could ever be. Was it his best? Far from, because it’s obvious that Elvis is “on cloud nine” so to speak and the unpredictiveness of the show must have bothered his musicians, and without a doubt the Hilton management.

All in all: this was Elvis in 1974, there’s no way of changing history. Either you like those shows, or you don’t. We do, which probably explains this positive review. And if you don’t, what’s there to loose with this quality package? Bring on Volume II, boys.

Login to give your opinion
pasa-ryu wrote on August 05, 2009
i just got this from a good elvis friend and was very happy with the book and cd's but i noticed it was the same cd's as the previous "Night Fever In Vegas",which said it was the 3am show,but it was'n't..its this midnight show!!..the soundboard cd's were not that much different to the previous cd's..same sound!!-all in all,a must have set if you DONT HAVE the previous "night fever in vegas" set?(otherwise i would not reccomend you getting it-apart from the superb book)lastley:i feel that RCA/FTD should have released a concert as good as this by now!-they did release nevada nights,so lets hope tey deiced to release "desert storm" album one day?(and the august 16th ,1974 rca studio rehearsals)
Ton Bruins wrote on August 05, 2009
" While Elvis often gets criticized for this kind of monologues, no one is criticizing Bob Dylan for his sometimes chaotic concerts during the 80s or Bono Vox for his lengthy monologues from U2. Sometimes you get the feeling that because it’s Elvis, it seems to be normal to bash him for all the things happened after the Aloha Special".. I agree but then again Elvis was under influence of some pills..But I like this show, no matter what..also I like Desert Storm..Great show. I didn't buy this re-release but I got the "Night Fever In Vegas" release. Good enough for me..
Jerome-the-third wrote on August 05, 2009
very fine release, nice book with it, good show, especially the version of mountain is fantastic..
Steamrollersteamroll wrote on August 05, 2009
Well , I just can't wait to get this release in my little tiny greedy hands ;-) I'm a 100% sure I will not be disappointed !!! And oh yeah ... Nice review Peter !
Greg Nolan wrote on August 06, 2009
First off, It's so nice to see ElvisNews back ("It's Alive!")...so thanks to Lex et al. I have to admit I'm a skeptic about the new turn towards premium, top-of-the-line releases from the import world. They are impressive but also over-the-top and at worst, exploitative(think "TTWII Complete Ruse" boxset..) on par with car and rent payments for too many fans... To their credit, they are in part doing this because of the impact of the "free" download scene as they ramp up the value included. Personaly, I was happy with the 16-page color booklets (with liner notes) that Straight Arrow, Southern Comfort or Madison and others have made the new norm. That said, I probably will take the plunge here. I am am asking in vein that the import world stop this..stop now...before I kill again...:)
marco31768 wrote on August 11, 2009
A great release ! Thank you very much, Venus !
Lefty wrote on August 28, 2009
I recently received my copy, and I'm thrilled with it. The sound quality is excellent for a soundboard, right up there with the best of the DAE releases. The book is almost perfect, except for a few typos and some strange sarcassam, it's really enjoyable. The best part is the concert itself. Elvis isn't as hyped-up as you might imagine. His voice and mood are clear. When he sings, he gives it everything he's got. The high note on HGTA is proof enough of that. It would've been great to have been there, but alas, this is the closest I'll ever get. A pricey CD package, but worth it if you can find a copy.
Ciscoking wrote on September 02, 2009
I have one problem with it...the show isn`t worth such an over-produced and therefore expensive release....hey..it`s just an average Vegas show..and not Houston 1970 or Pittsburgh 1976 or Indy 1977...you know ....I mean a 2 CD set with booklet would have been enough "honoring" of the show..
Orion wrote on September 08, 2009
It's great to see an import label not take themselves too seriously. There is a bit of scathing commentary throughout the package. The sound is great - really a top-notch soundboard. The book is amazing - I've never seen atleast 90 % of the pictures in the book. That alone is a rare treat as is the narrative. It's a great read. I agree it's a bit pricey, but I think it was money well-spent. Thank you Venus. Can't wait to see what you come up with next..
Erika Freiburger wrote on September 15, 2009
Beautiful book and good sounding CD's! This is the best sounding soundboard from the august/ september 1974 season. Far better than other official and unofficial releases from this season. If you already have NIGHT FEVER IN VEGAS then i'm not sure that it's worth to buy BLACK ANGELS, but if you still don't have this show in your collection then it's a must have!!!