Governor Haley Barbour today announced the placement of the latest Mississippi Blues Trail Marker honoring Tupelo’s blues legacy is perhaps most widely known — albeit in little detail — via its influence on a young Elvis Presley.

The Mississippi Development Authority Tourism Division Heritage Trails Program, the Mississippi Blues Commission and the City of Tupelo will hold dedication ceremonies at 3 p.m. Thursday. The marker will be located at 399 East Main St. in Tupelo.

“The story behind the king of rock ’n’ roll begins with deep roots in the blues,” Gov. Haley Barbour said. “It was the sounds of gospel and country found in the blues music that helped to vault a native son of Tupelo into a worldwide music icon.”

As a boy, Presley lived adjacent to the African American neighborhoods of “Shake Rag” and “On the Hill.” Shake Rag, located east of the old M&O (later GM&O) railway tracks and extending northward from Main Street, was one of several historic African American communities in Tupelo.

By the 1920s blues and jazz flowed freely from performers at Shake Rag restaurants, cafes, and house parties, and later from jukeboxes, while the sounds of gospel music filled the churches. The neighborhood was leveled and its residents relocated during an urban renewal project initiated in the late 1960s.

Mississippi is well known as a destination for music lovers. Gov. Haley Barbour created the Mississippi Blues Trail to recognize the talents of the state’s countless musicians in the Birthplace of America’s Music. When completed more than 100 sites will offer an unforgettable journey into Blues history.

The trail marker ceremony will be part of a day of activities in Tupelo to honor the birthday of Elvis. Birthday refreshments and musical entertainment will be held at the Elvis Presley Birthplace beginning at 1:30 p.m. The day’s activities will culminate with a concert dedicated to Elvis.

The marker as unveiled in Tupelo. 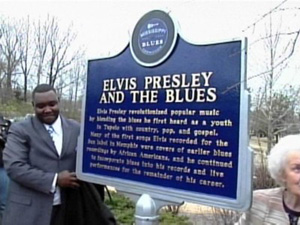 Source:Google
Login to give your opinion