A Legendary Performer 14 And 15

The Wolfcall import label keeps spitting out new volumes in the originally BMG series and later Madison “A Legendary Performer” series. Not counting the “Legendary Performer” talking only album which was released by yet another label we reached volumes 14 and 15.

No points here; a simple two pages copy of the original BMG design which was updated by the designers from the Madison label. On volume 15 Elvis looks very sad; a sign of things to come?

Regardless of your opinion on the people behind this label trying to earn a quick buck rehashing material taken from previously available releases (bootlegging is evil ?) I try to judge these releases on their content and listening pleasure.
What I find attractive with releases like this is the variety of material and use of alternate versions which make these releases sound differently from the standard BMG compilation. Yes we can probably create these compilations ourselves but I’m afraid I would stick to the same set of tracks I like best. When somebody else makes the compilation you will always find some surprised; either for good or bad.

The (so called) producers of this series have the tendency to add a lot of laid-back country and middle of the road matererial with the occasional movie or rock and roll tunes inserted. This makes the compilations very listenable.
From a collector’s point of view I’m not 100% sure what I’m listening to as the information on the takes is very incomplete. How many “extended versions” and spliced versions are available and who extended or spliced them? If they are vague about these versions, how can I rely on the take or live dates given for the other songs. But putting that aside and playing these volumes as background music I must say I enjoyed these two volumes as it does contain some great music from our man. 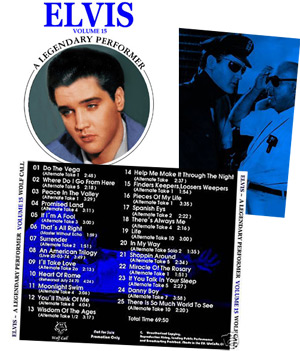 As for the compilations themselves, the opening tracks for both volumes are strange choices; “I Can Help” and “Do The Vega” don’t really get a party going but after those two strange selections the selection is pretty solid and I enjoyed a few selections I hadn’t played in a while like “A little Bit Of Green”, “Never Ending”, “Where Do I Go From here”, “Moonlight Swim”, “Finders keepers, Losers Weepers” to mention a few. The Spankox remix was probably taken from YouTube as it is the video version.

These compilations offer nothing new, so there is no reason to get them if you’re not too lazy to create your own compilation or don't own an iPod with 100 random Elvis tracks in shuffle mode.

Login to give your opinion
Natha wrote on December 11, 2008
Obviously they are targeting the relatively new collector, who as Kees already remarked don't know much about the number of takes etc and where to find better info/compilations. Hope these collectors find their way to sites like this before wasting money on releases like this.
Greg Nolan wrote on December 23, 2008
Well said, Natha. They are also trashing what was an unexpected pleasure for hard-core fans at the time of the original RCA titles (how easily we were pleased by some rare tracks!) and later expanded so faithfully by Madison. Wolfcall is moronically releasing stuff already available from RCA and FTD and who is buying it? Could the new collector fall for this? And as you say, Kees, it's akin to a "an iPod with 100 random Elvis tracks in shuffle mode." I don't own an Ipod but have loaded my Elvis CDs to my work computer and do listen to them on shuffle often with a surprising mix resulting. But buy it on Wolfcall? What crap.
ImmerElvis wrote on January 12, 2009
But...don't we have all those different takes already on both ftd and boots with different labels? In the end I am afraid that ftd will have to buy some tapes back from bootlegers who own and probably paid a lot of money for such tapes, so that ftd can release those (incl. several missing movie outtakes and remaining studio session outtakes) in order to be able to continue the release of the Leg Performers series.
Elvis Mixer wrote on July 20, 2010
Well, there will always be someone who will buy these types of albums. Some will buy a CD just because of not having one track from the album. What used to be a fantastic collection, has now turned in to a farce, such a shame. Ripping off Elvis just to make a few extra quid. In answer to a question in the write-up; On Volume 14; "A Little Bit Of Green" this is my original track, originally was featured as a bonus track on an album I mixed called "Extending My Love". This version just as the ending made longer and I have removed some of the backing, the other remixes included are not re-mixed by me.