March 25, 2005 | People
Part two of the “interview” with Ger Rijff, based on questions from visitors of both the For CD Collectors Only and ElvisNews websites. 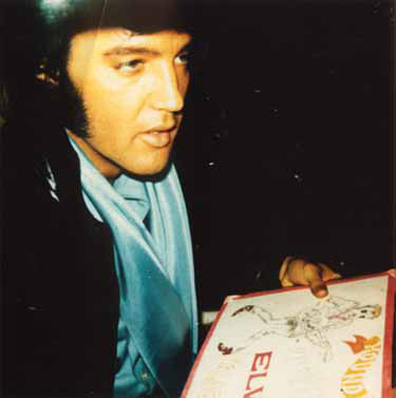 (Holding a cartoon made by Ger back in 1970) Question: In your book ‘Elvis – Long lonely Highway’ (1985) there’s a small photo of Elvis on page 184 with the caption: ‘Elvis’ receiving a Ger Rijff illustration in 1970’ What’s the story behind this photo? (Jeroen, Holland) Ger: Back in 1968 I was a member of a fan club in the US and had done several illustrations for the club’s newsletter. The lady in charge of the club – I believe her name was Judy Palmer – asked me to do a large cartoon of Elvis for her. Being the nice guy I am I made one, mailed it to her and some two years passed by when I received two candids in the mail of Elvis in 1970. To my great surprise on one he held my cartoon. Judy had asked Elvis to sign it for her, took the photograph and mailed them to me. Whatever happened to the original signed cartoon, I don’t know. Judy, are you still there somewhere?

(Angry young man and the most famous of the Speer photos). Question: Do you have the correct date for the professional photo session done at William Speer Studios in Memphis? Some say Nov ’54, others say March ’55? (Dr. John Carpenter) Ger: The correct date I don’t know but I would surely place them in the spring of ’55. Look at the one with his black shirt and white sports coat doing his angry young men pose. That could never be from 1954 Question: Have you ever seen 1955 footage from the “Louisiana Hayride” or “The Pied Piper of Cleveland”? (Dr. John Carpenter) Ger: No Doc, I haven’t. Otherwise I would have shared the experience with the rest of the Elvis world for sure! Question: What era do you consider Elvis to be at his peak vocally? (Andy, England) Ger: For me 1960-1963 without a doubt. Though some of the songs recorded during the How Great Thou Art sessions are mind blowing performances at well. And than of course there’s his incredible vocal power during the ’68 TV special, and …and…and. He was a pretty good singer, wasn’t he? Question: Where can I buy some books from you? I am looking for some worldwide but I can not find a salesperson who have it. Hope I can get it from you? Please let me know? (Bernie Willems, Germany) Ger: Why don’t you try the sites? See if anybody wants to part with them? Good luck Bernie. Question: I’m very sorry for my bad English. Is a new series of books like “Inside …” to come out soon? Thanks very much. (Sincerely salutations (Villemain Paul, France). Ger: Hi Paul, no problem with your English. Yes, now that I’m finding my way back in the wonderful world of Elvis through modern technology (meaning Elvis websites) I plan to pick up from where I left some years ago. How fast, how soon? That I don’t know. Question: Will there be a “My wish came true Vol. 2”? (Nigel Grant, UK) Ger: Yes, but not before 2006. I already have started out material for a 2nd volume. Now it’s up to how I feel health wise in the months to come. Thanks for your interest. Question: Are your books such as “Inside Loving You” and “Inside King Creole” planned to release in France? Thank you in advance (Val. B. – France). Ger: I can’t see that happen. The fans that have interest in my publications will have both titles in English and from what I know there’s no real big interest from the general public in what I have to offer you. You can’t win ‘m all….. Question: Was Elvis ever in any car accident? How tall was he? (Toni, USA) Ger: Good gawd! As it says at the beginning of this question & answers article: He knows a lot but not all” I really don’t know about car accidents. He was taller than me and smaller than Ernst Jorgensen…… 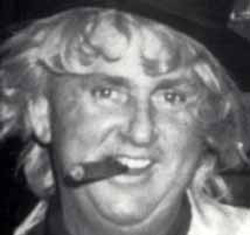 (Would you buy a used car from this man?) Question: Would Elvis have lasted as long without Col. Parker? Ger: I would even dare saying he would have lasted longer had he kicked out that old Dutch fox somewhere in the early seventies. I know there are people feeling the Colonel was doing a good job – Peter Guralnick, the brilliant Elvis biographer is one of them – I don’t agree at all. Yes, sure during the years up to his return from the army in 1960 the Colonel had some clever tricks up his sleeve. But when Elvis got trapped in the Hollywood crap and later on trapped in Vegas the only thing the Col. Could think about was money. And sadly enough Elvis wasn’t the type of guy to correct the Colonel’s shit. Elvis often complained about having to do things he didn’t want to. He complained about it to his friends, buddies, family a lot. But not the carny fox when they stood eye to eye. Sad, really sad. - To be continued,

Login to give your opinion
Deke Rivers 6 wrote on March 26, 2005
I do like these Q / A with Ger Rijff , how old is Ger ?
Ton Bruins wrote on March 29, 2005
Ger is absolutely right about Col. Parker. Elvis should have kicked him out and find himself a new manager. But sadly is Elvis the only one to blame that he didn't do that.