January 26, 2002 | Book
"Kill Me Tender" is a pure fiction "murder mystery" featuring Elvis Presley. Well, why not? There are many "fact"-books written about Elvis that are playing more or less fast and loose with those facts. At least the cover of this book states that this time it is fiction.
Elvis playing detective is not a strange idea at all, because it is a well-known fact Elvis had the hang of the police enforcement. Overall it is clear that the writer studied his main character pretty well. He does not only recommend Peter Guralnick's works, but it looks like he actually read them.


Daniel Klein took some liberties with stipulations as to time that catch the eye of the reader immediately, at least when the reader is an Elvis-fan. To the less fanatics those stipulations are just "Elvis-facts" that may seem in place. We can safely place the story in 1960, because most "facts" point to that. Elvis is home for just a couple of months after returning from Germany and "Elvis Is Back" is his latest album. Being a couple of weeks from the filming of "Take Me to The Fair" is in contradiction with this, because this movie (which became "It Happened At The World's Fair") was not filmed before the last quarter of 1962. Also a statue of Elvis in a jumpsuit and a TCB-belt do not really fit in the 1960-picture, because it took another decade before those things showed up. On first sight it looks strange that some of the Elvis-related people are mentioned by name, like Priscilla, Vernon, The Colonel and The Jordanaires, while Elvis' close friends are fictional.

Here we'll stop the hair-splitting. Assuming you like murder-mysteries at all this book is a nice read. It is fast, but demanding: it forces you to read on, even when you know you should go to sleep, because you have to go to work again the next day. The mystery starts when two young girls, both presidents of local fanclubs find an untimely death. Elvis gets involved and before you know it you are reading about P.I. Presley instead of G.I. Presley. There are some tender, touching moments, of course there is tension too and even humour can be spotted on several pages. In other words we enjoyed the book very much and therefore we won't say anything more about it, especially not regarding the story line. Not to give away the clue and to be sure we won't spoil your pleasure reading it! 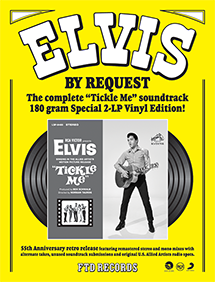